9 ratings
Added about 7 years ago

Siew O
written over 4 years ago

Livvi's Place is a lovely inclusive playground at Yamble Reserve for all abilities, and has the benefit of being fenced for those with kids who like to wander. It's best up to the ages of 5/6 years, my older child found it a little boring from around 6 years. Yamble Reserve itself is lovely too, with barbecues and plenty of grassy open space, with a bike track that runs around the park in a figure 8.

I really loved this place it's awesome! We're going to do my sons first birthday here!

Tony N
written over 6 years ago

This is a very comprehensive playground and really safe with the fence around it. My kids loved the flying fox and sand pit.

They need more shaded areas it's very hot and even on non busy weekends all the shade is taken. Also a cafe would be great as no shop near buy so pack everything!!

Awesome Playground! Has wonderful modern play equipment, BBQ areas, toilets and plenty of space to spread out. Lots of shade from shade cloth & well established trees. Gorgeous atmosphere! We had a lovely time at this park & would travel there again for sure.

Agatha
written about 7 years ago

Lovely playground, inclusive for different abilities and with different, exciting and fun equipment.

Suzette Hosken
written about 7 years ago

Livvi's Place at Yamble Reserve was opened with a colourful bang on the 3rd of February 2013. A huge number of partners contributed to the creation of this $1.5M playground, and yes, it looks like $1.5M was spent on it. It is truly stunning.

As in all of the Livvi's Place playgrounds, the equipment is very carefully chosen and laid out to allow for easy accessibility for people of all abilities. That includes young toddlers, older kids, children with different abilities and disabilities, parents, grandparents, friends, everyone! This is a community playground that entices parents to get in there and play WITH their kids, not sit on the sidelines, and there is plenty of room to allow this to happen.

Some of the equipment includes a double flying fox, one with a pommel seat and the other a full seat with a harness; a spinning rope pyramid (seemingly with permanent kids attached as it's hugely popular); a sand play area; wonky mirror; musical and percussion elements; bird's nest swing; spring-rider car and bird; satellite dish spinner and much more.

There is a large network of rubber turf that is most interesting and quite unique. The turf moulds up and down little hills, with one area hiding a tunnel underneath. The bright colours with high contrast assist people with vision impairments and gently direct and inform people as to safe areas and where to go next. I love the lumpy blue hill, although I didn't see many kids using it (I'll just have to go back!). However the yellow hill with the hand-holds down the side and the tunnel underneath was a huge hit with the littlies. This whole area allows for safe exploration for people with limited mobility and easy access for parents and carers.

Another feature that really stands out is the beautiful sculpture. There is an animal theme meandering throughout the playground, with stone sculptures of frogs, possums, owls and many other animals. These are mostly at the quieter, less-busy end of the playground where there is a spiral pathway that circles its way amongst the totem poles and plantings and ends at a 'pole garden'. This is a beautiful area in which to explore, feel and bong the various elements, and admire the artwork.

The playground clearly has busy and quiet areas so kids can retreat if they need to, but still be within the fenced area.

There is a barbecue within Livvi's Place and another in the grassed area of Yamble Reserve. Toilets are down a pathway outside the fenced area. There are many shade sails, but because of the sheer size of the playground, there are still many areas in full sun. The softfall under all play pieces is rubber turf.

A huge round of applause goes to The Touched By Olivia Foundation for bringing this superb playground to life.

Have your say. Write a review of Livvi's Place Ryde 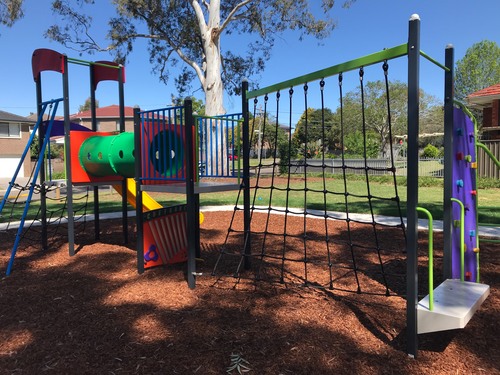 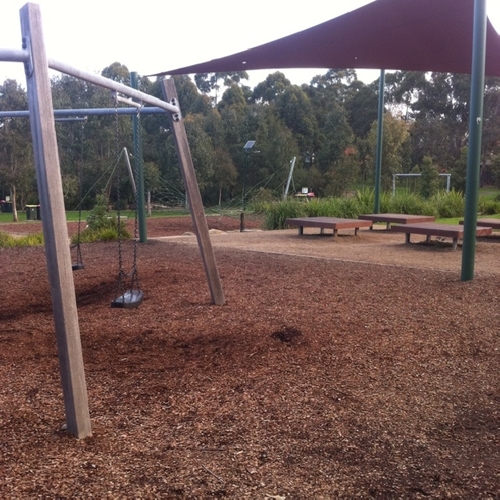 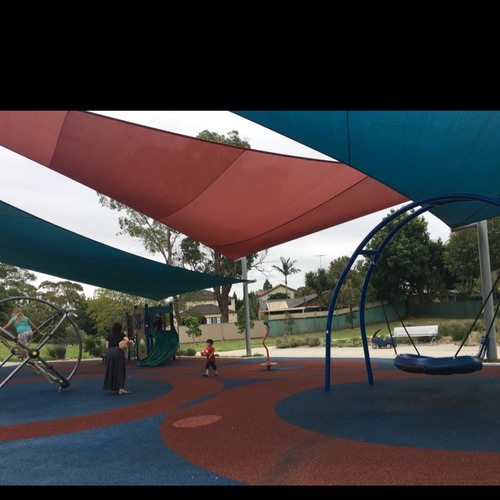 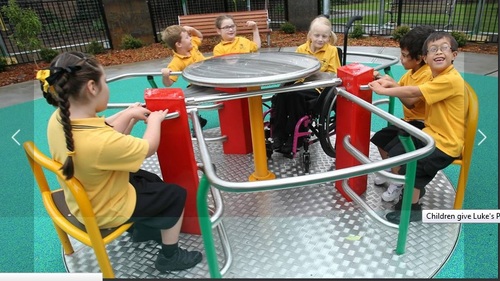